I read an article yesterday that there was to be a meteor shower for the next two nights that would be visible without the need for a telescope. Given I’d got myself all worked up about an issue at work, I thought a nice reminder of how unimportant it all is would be just the thing I needed. I went out after 10pm to have a look as the sky was clear, I couldn’t see any meteors, or indeed the satellites which everyone else seems to be spotting recently but I did see what I think is Venus shining brightly in the sky. I tried to capture it, but it’s a bit blurry:

Anyway, today is a new day. I’ve downloaded an app to my phone which helps you identify which stars/constellations you’re looking at & I’ll try again tonight.

UPDATE: Still couldn’t see the meteor shower but the app (Star Tracker) did at least show me where the Lyrid constellation was so I could be confident of looking in the right place. Rose and I had some fun using the app to try and find the names of the stars we could see. 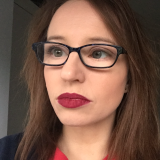 Tea drinker extrodinaire; lover of the outdoors and nature.